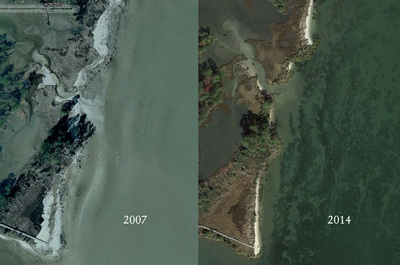 Why We Do It

In the 1880s, the Chesapeake Bay was producing in excess of 20 million bushels a year – a staggering number even by contemporary standards. It would prove to be the high water mark. By the 1920s the bubble had burst and the Bay was averaging 6-7 million bushels a year – still, a volume that rivaled any oyster producing region in the world. But by 2004, the cumulative effect of a century of little restraint, increased disease vulnerability due to a dwindling population, and a stressed environment, took the Bay to the brink. That year the Bay produced a mere 48,000 bushels. It was estimated that we had just 1% remaining of the oysters we had in the 1880s. Understandably, the conversation turned grim. There was talk of moratoriums, the Endangered Species list, and, worst of all, abandoning hope and simply introducing a foreign species.

By the mid-1990s, residents in the Bay area (largely retirees), began experimenting with oyster aquaculture, a technique that was seeing great success in France and the Pacific Northwest. Oyster aquaculture was nothing new – it dates back to Roman times – but it had hardly seemed necessary, given the Bay’s tremendous natural fecundity. France, for instance, resorted to aquaculture because it had depleted its native resources … by the 1860s. And so aquaculture was viewed as a last resort of a dying industry – or as was the case in the Pacific Northwest, it was a method for growing a foreign oyster.

What wasn’t fully appreciated was that aquaculture was the right answer, regardless of the situation. A century of intensive extraction had devastated the Bay's seafloor, tearing up critical grasses and creating vast wastelands of soft mud. That the Chesapeake was looking at aquaculture before it had completely decimated its natural stock was, for us at least, a sign of hope.

For most of us, standing at the seafood counter, choosing between a ‘wild’ fishery and a farmed one is a no-brainer. Of course ‘wild’ is better, if the fishery is properly managed. Or is it?

Say the word aquaculture and 90% of people conjure up images of wretched, land-locked fish farms where pelletized chicken parts are shot at crowded tanks of fish (who hardly even know they’re fish) – or putrid backwater swills where fish are again contained and fed. Those types of aquaculture are neither sustainable nor are they tasty.

All aquaculture is not created equal. Some mimic nature, while others are, frankly, an affront to it. Our philosophy at Rappahannock is simple … nature does it best. And so, rather than attempt to control our environment, we look to the natural process to help guide our process. That means studying and leveraging the natural rhythms and listening when nature pushes back, because in the end, we’re hoping to increase nature, not tame it.